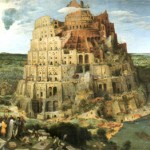 The Tower of Babel by Pieter Bruegel the Elder (1563)

This research project was jump-started through fellowships at the Smithsonian and with the Carnegie Council in 2004-2005. It grew from opportunities in each case to interact with cultural workers and with the professional human rights community, in ways focused on the diversifying intersections of “culture” with the “rights” concept, in international law and as part of the work of multilateral cultural convention making in such institutions as UNESCO. This research has given particular attention to the arenas within which cultural rights strategies have emerged as central to international political claim-making and as an increasing part of the domestic and foreign policy landscape in multilateral contexts. This project is concerned with the ways that cultural rights have become an increasingly prevalent: basis for the advancement of claims by communities, idiom of dispute and negotiation among nation-states in the work of multilateral bodies, and means of framing public debate and policy about domestic culture industries, intellectual property, international development, repatriation disputes, among other arenas.

This project pursues the specific ways that arguments over the location of cultural rights have become increasingly central to international affairs in recent decades, particularly for international and multilateral legal regimes. This project is, furthermore, concerned with the particular effects of international NGO networking, partnering, capacity building, and civil society goal setting, in close collaboration with local and international agencies, as largely responsible for the promotion and construction of cultural rights frameworks and new multilateral cultural  policy initiatives. At present, the role of international cultural rights NGOs in the work of global cultural governance is not well understood. But they are one important means through which cultural rights are promoted and incorporated into a wide array of global agendas and priorities. New cultural rights formulations are a key part of the legal, economic, and regulatory frameworks of governance through which local communities are obliged to advance claims and assert priorities in the international context and while contending with often problematic state policies. At the center of this project, then, is a concern for the ways that emerging formulations of cultural rights can also alienate communities and cultural producers from their own cultural content, when contending with states invested in defining, promoting, defending, and legally securing national cultural heritage, as a scarce resource.